What is SAP Landscape? 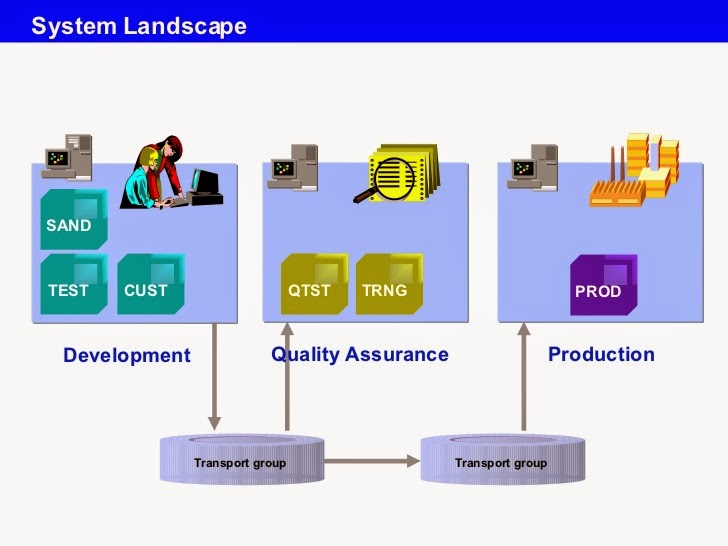 What is SAP Landscape?
Landscape is like a server system or like a layout of the servers or some may even call it the architecture of the servers viz. SAP is divided into three different lanscape DEV, QAS and PROD.
–  DEV would have multiple clients for ex: 190- Sandbox, 100- Golden, 180- Unit Test.
–  QAS may again have mutiple clients for ex: 300- Integration Test, 700 to 710 Training.
–  PROD may have something like a 200 Production.
These names and numbers are the implementer’s discreet on how they want it or they have been using in their previous implementations or how is the client’s business scenario.
Now whatever you do in the Sandbox doesn’t affect the other servers or clients. Whenever you think you are satisfied with your configuration and you think you can use it moving forward, you RE-DO it in the golden client (remember, this is a very neat and clean client and you cannot use it for rough usage). As you re-do everything that you had thought was important and usable, you get a transport request pop up upon saving everytime. You save it under a transport request and give your description to it. Thus the configuration is transported to the Unit Test client (180 in this example).
You don’t run any transaction or even use the SAP Easy Access screen on the 100 (golden) client. This is a configuration only client. Now upon a successful tranport by the Basis guy, you have all the configuration in the Testing client, just as it is in the Golden client. The configuration remains in sync between these two clients.
But in the Testing client you can not even access SPRO  (Display IMG) screen. It’s a transaction only client where you perform the unit test. Upon a satisfactory unit test, you move the good configuration to the next SERVER (DEV). The incorrect or unsatisfactory configuration is corrected in Golden (may again as well be practised in the sandbox prior to Golden) and accordingly transported back to 180 (Unit Test) until the unit test affected by that particular config is satisfactory.
The Golden client remains the ‘database’ (if you wanna call it that) or you may rather call it the ‘ultimate’ reference client for all the good, complete and final configuration that is being used in the implementation.
In summary:
Landscape : is the arrangement for the servers
IDES : is purely for education purpose and is NOT INCLUDED in the landscape.
DEVELOPMENT —> QUALITY —-> PRODUCTION
DEVELOPMENT : is where the the consultants do the customization as per the company’s requirement.
QUALITY : is where the core team members and other members test the customization.
PRODUCTION : is where the live data of the company is recorded.
A request will flow from Dev->Qual->Prod and not backwards.
1. Sandbox server: In the initial stages of any implementation project, You are given a sandbox server where you do all the configuration/customization as per the companies business process.
2. Development Server: – Once the BBP gets signed off, the configuration is done is development server and saved in workbench requests, to be transported to Production server.
3. Production Server: This is the last/ most refined client where the user will work after project GO LIVE. Any changes/ new develpoment is done is development client and the request is transported to production.
These three are landscape of any Company. They organised their office in these three way. Developer develop their program in Development server and then transport it to test server. In testing server tester check/test the program and then transport it to Production Server. Later it will deploy to client from production server. 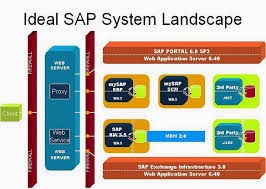 One response to “What is SAP Landscape?”