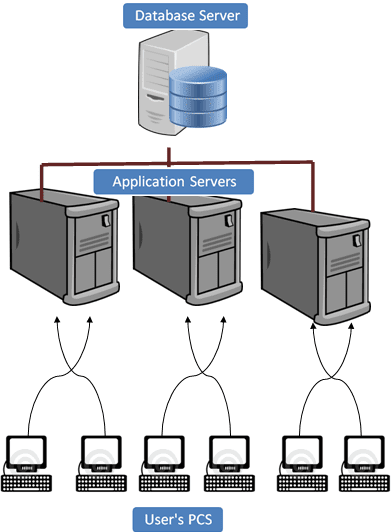 The presentation layer sends the user’s input to the application server, and receives data for display from it. While a SAPgui component is running, it remains linked to a user’s terminal session in the R/3 System.

Database Layer :The Database Layer consists of a central database system containing all of the data in the R/3 System. The database system has two components – the database management system (DBMS), and the databse itself. SAP has manufactured its own database named HANA but is compatible with all major databases such as Oracle.All R/3 data is stored in the database. For example, the database contains the control and customizing data that determine how your R/3 System runs. It also contains the program code for your applications. Applications consist of program code, screen definitions, menus, function modules, and various other components. These are stored in a special section of the database called the R/3 Repository, and are accordingly called repository objects. R/3 repository objects are used in ABAP workbench.
Understanding the components of SAP R/3 3-tier Architecture:-
ABAP+Java System Architecture

Dispatcher Queue: Various workprocess types are stored in this queue.

Dispatcher: It distributes requests to the workprocesses.
Gateway:It enables communication between SAP system and between SAP system and external systems.
ABAP-Workprocesses:- It separately executes dialog steps in R/3 applications.
Types of workprocesses are given as below:-
Memory-pipes: It enables communication between ICM and ABAP workprocesses.
Message Server: It handles java dispatchers and server processes.It enables communication within java runtime environment.
Enqueue Server:It handles logical locks that are set by the executed Java application program in a server process.
Central Services:Java cluster requires a special instance of the central services for managing locks and transmitting messages and data. Java cluster is a set of processes that work together to build reliable system. Instance is group of resources such as memory, work processes and so on.
Java Dispatcher: It receives the client requests and forwards to the server process.
SDM: Software Deployment Manager is used to install J2EE components.
Java Server Processes: It can processes a large number of requests simultaneously.
Threading: Multiple Processes executes separately in the background , this concept is called threading.

ICM: It enables communication between SAP system and HTTP,HTTPS,SMTP protocol. It means by entering system URL in the browser you can access SAP from browser also.
One more component is JCO. JCO is used to handle communication between java dispatcher and ABAP dispatcher when system is configured as ABAP+Java.
How the SAP Logon Process works?
What is SAP R3 Architecture ?
Step 1) Once user click on the SAP system from GUI , User request is forwarded to Dispatcher .
Step 2) Request is stored in Request queues first. Dispatcher follows First in First out rule .It will find free workprocess and if available will be assigned.
Step 3) As per user request , particular workprocess is assigned to user.

Step 6) Other requested data is queried from the database and once the process is complete, the result is sent back to GUI via dispatcher.
Step 7) At the end user’s data is removed from shared memory so the memory will be available to other users. This process is called roll-out.
SAP Client Copy – Local, Remote & Import / export
What is SAP Landscape?