Sparky is based on the Testing branch of Debian 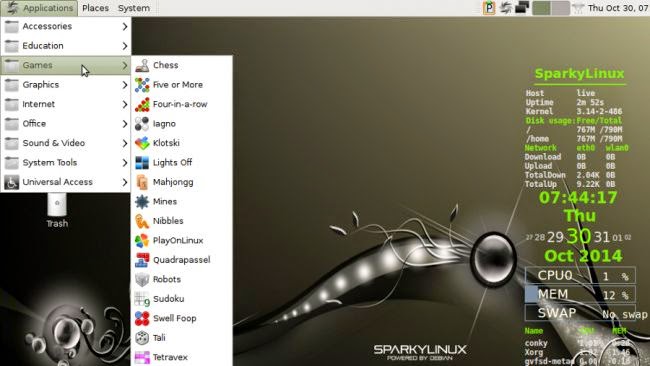 Based on the Testing branch of Debian, Sparky Linux releases regular installable images despite being a rolling release distro. Designed to work with older hardware, it’s also at home with newer machines.
The distro also borrows Debian’s installer and is available in several editions, each favouring a separate lightweight desktop environment. Apart from the installer, the different flavours also share several custom Sparky apps.
The SparkyAPTus app provides a basic front-end to the command line apt-get and dpkg tools and serves as a capable software management tool. The new SparkyAPTus Extra utility can be used to install popular apps such as Dropbox, Skype, Steam, Tor Browser and more with a single click.

The distro also includes custom apps to back up and restore app settings. The settings are saved in a compressed archive and you can then point the complementary restore app to this archive to restore the settings. There’s also an app to securely and permanently delete files, a wine wrapper to install Windows .exe files, and more…
All the variants ship with popular apps such as LibreOffice, PlayonLinux, GIMP, Hotot Twitter client, gFTP, Pidgin, Gnome MPlayer, VLC Player, recordMyDesktop screencaster, and so forth.
Sparky Linux is best suited for reasonably experienced users and isn’t recommended for beginners.