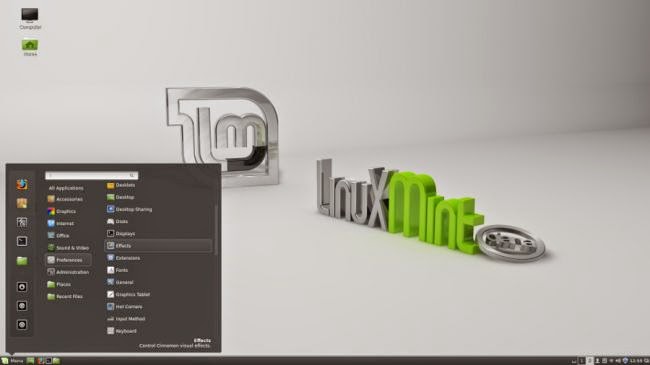 There are two key reasons for Mint’s stellar rise in the popular distro charts. One is that it’s based on Ubuntu, and the other is that despite being based on Ubuntu, its default desktop is much more traditional than Ubuntu’s controversial Unity interface.
Linux Mint offers users a choice of two Gnome-based environments, which are dubbed Mate and Cinnamon. Mate is designed to be a faithful continuation of the outdated Gnome 2 desktop. Cinnamon on the other hand appears more modern with a neat menu that provides quick access to all the system’s settings and applications in one place.
Like Ubuntu, this distro is also preloaded with a full complement of daily use applications for work and pleasure. But in a marked departure from several mainstream distros like Ubuntu and Fedora, Mint ships with audio and video codecs catering to your multimedia needs out of the box.
The latest release, Mint 17, is a long-term release that will be supported until 2019. As with the current release, the distro’s next few releases will also be based on Ubuntu 14.04, itself an LTS release. This means that this OS will not introduce any stellar new features until Mint 18, scheduled for release in 2016. As a result, users running Mint 17 can choose not to upgrade to the upcoming Mint 17.x releases.
Verdict: A simple to install and polished desktop that works out of the box. It’s ideal if you’re looking for a stable system that won’t introduce any major changes any time soon.
Rating: 9/10
More than 100 Keyboard Shortcuts (Microsoft Windows)
What is SAP Landscape?
SAP Client Copy – Local, Remote & Import / export
Linux ubuntu
Linux Fedora