Korora is now based on Fedora
Linux Mageia 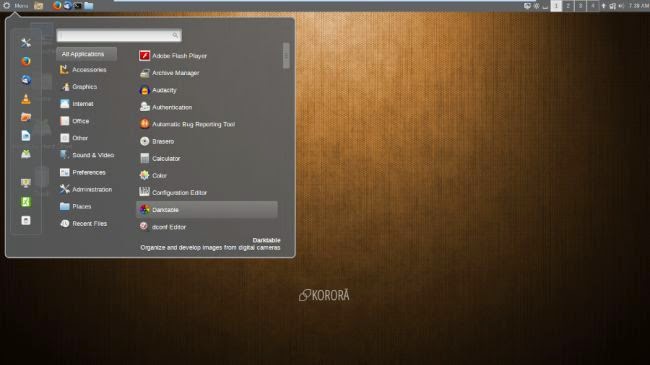 This distro was initially based on Gentoo but now uses Fedora as its base. It ships separate editions for Gnome, Cinnamon, Mate, KDE and XFCE, and offers each for 32-bit and 64-bit architectures.
As the project is based on Fedora, a new Korora release is shipped roughly two to four weeks after the latest Fedora release. The distro ships a live DVD which includes a wide array of applications, making it suitable for a large number of users. This package selection is driven by the distro’s need to be usable straight out of the box.

Apart from the included software, you can always install even more packages from the software repositories. Several third-party repositories, such as RPMFusion, Google Chrome and VirtualBox are configured by default. The newer releases of the distro also include the Steam client.
The default browser, Firefox, ships with several useful extensions such as Adblock Plus, DownThemAll, Flashbock, and so forth.

For software management, Korora offers the choice of Apper and YUM-extender, two of the most popular graphical package management tools for YUM-based systems.
The distro comes with several custom tools. The Pharlap Package Manager is a utility designed to help users easily install third-party drivers, pertaining to wireless devices and Nvidia graphics cards, for example. The useful undistract-me utility pops a notification when a terminal command has completed.
Verdict: The most desktop-friendly Fedora distro is ideal for beginners and gurus alike.