Gentoo is not for the faint of heart 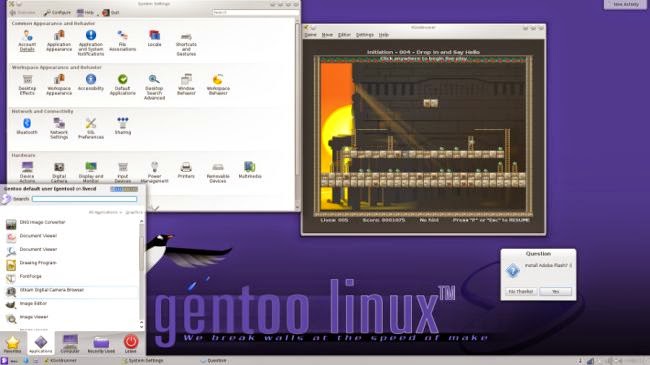 It wouldn’t be wrong to claim that the current crop of Linux distros expend far too much effort to appear more pleasing to new users. From installation to package management, everything is aimed at being more user friendly. What’s more, most of these distros aim to take much of the control away from users.
With Gentoo, users can exert their influence in building the system from the ground up. It’s one of the most configurable distros, and expects you to compile the kernel after tweaking it according to your needs during the installation.
The distro packs an awesome package management system in Portage which you must use to fetch every package you wish to install. The Gentoo DVD, although not an installation medium, can be used to come to terms with the Portage system.
You will encounter a steep learning curve as you’re introduced to critical Linux internals and several new technologies native to Gentoo, such as the USE flags system. Thankfully, the Gentoo Handbook is a detailed guide that is a must read before you begin your Gentoo journey.
Unlike most other distros, a Gentoo installation can take several hours and even days, depending on your needs and system resources. The rolling release nature of the distro means that updates are provided from time to time.
Verdict: Highly customisable distro which gives complete control to the users. Recommended only for experienced and patient users eager to learn Linux internals.
Rating: 9/10
More than 100 Keyboard Shortcuts (Microsoft Windows)
Linux OS Conclusion
Linux Elementary OS