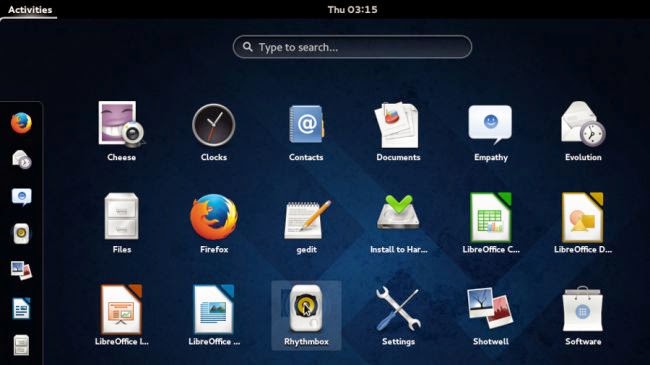 One of the oldest Linux distros, Fedora can trace its origins back to the 1990s and Red Hat Linux. Fedora came into being when Red Hat decided to split its Red Hat Linux distribution into Red Hat Enterprise Linux and Fedora Project in 2003.
The distro aims to provide a completely free software system and has traditionally been pitched as an alternative to Ubuntu. Due to its focus on providing bleeding edge software and server-centric features, this RPM-based distro has often been described as suitable for advanced users.
Fedora’s ease of use has diminished since the introduction of the Gnome 3 desktop, a phenomenal departure from the traditional desktop metaphor. The Gnome project, however, has worked tirelessly to provide a better user experience to new users and this is evident in the latest releases.
Fedora has traditionally lacked a decent software management tool despite several attempts at providing a suitable alternative to the popular Synaptic Package Manager. Perhaps it will have better luck with Gnome Software, the continuously improving Ubuntu Software Centre lookalike.
The project aims for a new release roughly every six months. With the next release, Fedora will begin offering three variants: Cloud, Server and Workstation. Each of these will be built upon the same base, with other components added on to suit the target user base.
Verdict: A very capable distro for an experienced Linux user, and one that’s trying to reinvent itself.
Rating: 7/10
More than 100 Keyboard Shortcuts (Microsoft Windows)
Linux ubuntu
SAP Client Copy – Local, Remote & Import / export
What is SAP Landscape?
What is SAP R3 Architecture ?