I am not a person who believes that weekends are for movie watching.

After a hectic first half yesterday, which was a Saturday, i took a snooze. Woke up with a start and immediately decided that i have to watch #Kantara. Why? Don’t ask me. Something told me that i should. 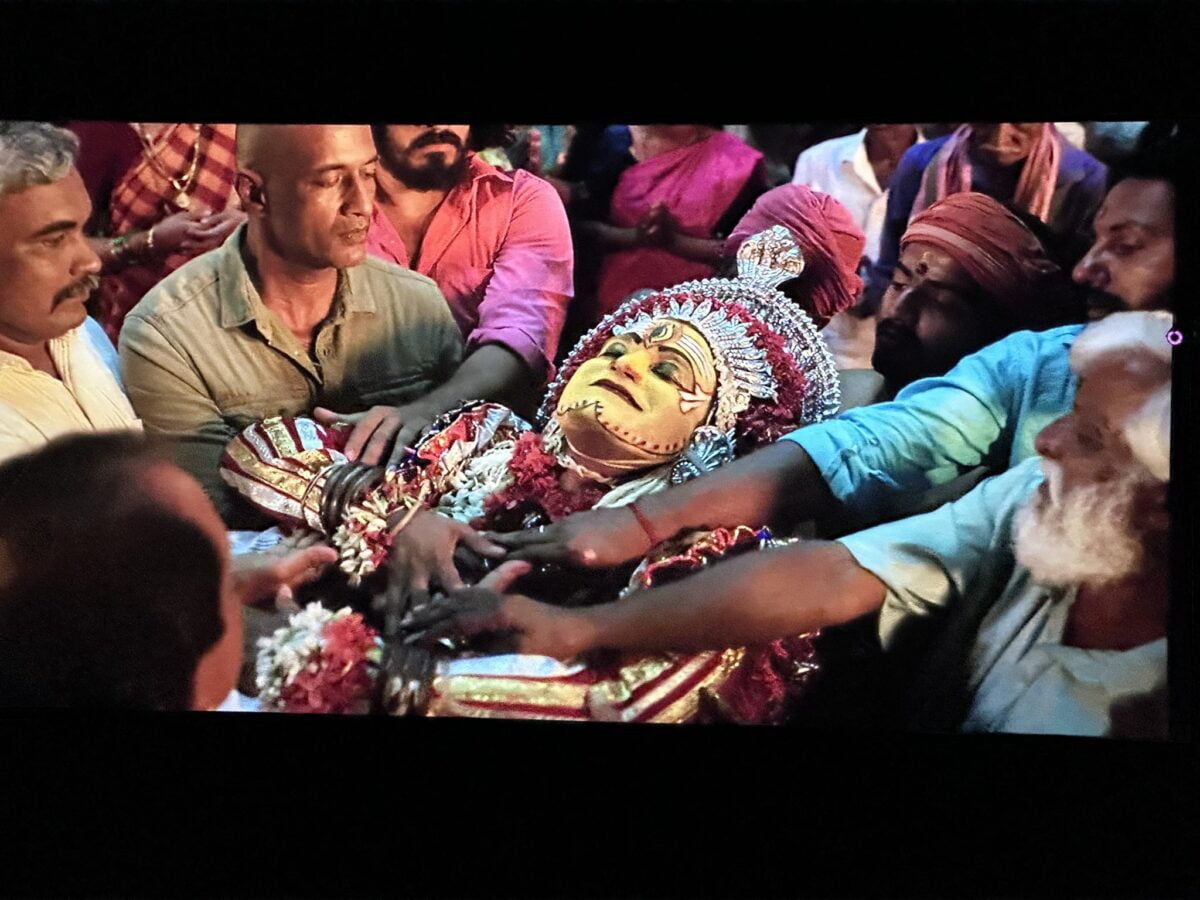 Scrolled through many theatres screening the Telugu version in Hyderabad / Secunderabad and almost every show was full.

I spotted a theatre in Chilkalguda, near Secunderabad, a place close to Osmania University where i did my schooling. There was one solitary seat in the top row for the 6pm show that was available. Booked it immediately, and drove like crazy, lost my way despite Google Maps. Made it just as the first scene unfolded on the screen.

And for the next two and half hours, i could not believe what i was witnessing. Even after coming out of the theatre, i drove home playing the #VarahaRoopam video in a loop. Back home and I was still in trance.

Kantara is not a movie. It’s a spiritual experience that cannot be described. It has to be felt. It took me back to the tales that my grandmother had told me when i was a kid, during my summer vacations in Kerala. Of Kings and Demons. Of a spiritual connect between humans and Gods.

Kummati Kali, Chakyar Koothu, Ottam Thullal, and the venerable Velichapadu. I have seen and experienced them all in my village, which is near Thrissur, in Kerala. But, this was different. One gets transfixed as the movie builds up. It’s like asking “Is this for real?”

Kantara is set in the picturesque Tulu Nadu, which straddles the coastal region from Kasaragod in Kerala to Mangalore, Ullal, Udupi, and Kundapura in Karnataka and slightly beyond. The cultural borders between Kerala and Karnataka, blurs in many places.

Rishab Shetty‘s storytelling is unparalleled, so is his portrayal of Shiva, a person who oscillates between irresponsibility and divinity. This is story that revolves around a demi-god – Bhoota, who trades the forest land of the tribals with the king – in exchange of his happiness. The king’s future generations are not willing to honour that unwritten agreement, and as was expected of them, start demanding that the land be returned to them.

The Bhoota Kola reminds me of the Theyyam art form of northern Kerala, which is almost extremely similar in music, costumes and trance. It also mirrors Velichapadu, the oracle in temples of Kerala, who is possessed by the spirit of God, and serves as a bridge between the Deity and Devotees.

The last 15 minutes of the movie is something that will shake you up and Guliga Daiva will echo and revebrate through every part of your body. As you leave, you will be a different person from the one who entered the movie hall.

Kantara has shown what life in remote hamlets of tribal areas is all about – the humdrum of their everyday life, their rituals, their drinking habits, their food, their simple living and finally, their belief in the tradition and reverence to their Gods.

There is also the way of life of the tribals in their hunting, their forestry produce, their land – which the government believes has been encroached. All these have been woven like a fine tapestry of music, dance and drama.

I am not getting into the amazing performance of the entire team that made this movie possible. What made glad was the audience that I was seated with in the theatre. They were mostly young who were laughing, screaming and during the climax that they looked dumbstruck.

Kantara takes us back to our roots, our traditions, our rich and varied culture. It’s not a movie, it a cultural renaissance. Something that we forgot as we moved from our villages to cities.

The era of grandmothers telling us bed time tales does not happen anymore. It took Rishab Shetty to remind us that we need to go back to our roots – and reclaim it. #TatTvamAsi

By – Suresh Kochattil
from – DrVivekanand Rayapeddi  –
Volumes could be written about this one scene. The Lord of the witnesses is saying here, “I will keep you (those who are righteous) in my heart.” Don’t miss the virtue. Just saw how I wiped out the sinner, ecological balance must be missed (first forest ranger holds his hand on his heart). Then he took the hands of the village people and placed it on his heart and waved with the urine. (May all the people be happy). Y’all better stick together, Oncheppi ran into the woods with a crow. Everything is a mystery. Super scene
Pic courtesy of: Suresh Kochattil

Embassy of India, Kuwait Advisory on Amnesty for Residency Violators